Note: Failure to follow these directions step by step can result in personal injury or Love Jugs failure. 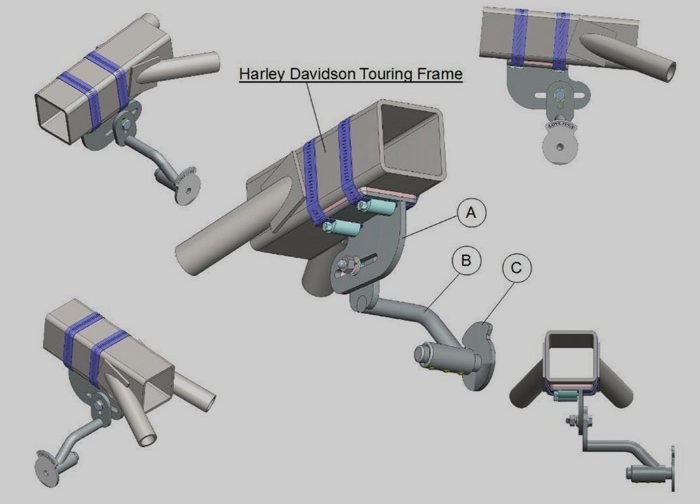 STEP 2. Disconnect the gas line hose IMPORTANT This is a quick disconnect fitting, that works like an air hose fitting. Push the chrome collar up towards the tank, and pull the elbow down and it will easily disconnect. Only a couple of drops of gas will spill from the tank. IMPORTANT Do not try to unscrew the nut on the bottom of the tank. Doing that will cost you $75. for a destroyed plastic tube located inside the tank, and a an hour of labor. Now, disconnect the tubes and electric plug connections, at the base of the tank. IMPORTANT Make sure all the connections have been disconnected before you remove your gas tank. Tip. It is a lot easier to remove your gas tank when it is empty or near empty.

STEP 3. Remove the Chrome Acorn nut that attaches your horn and horn cover assembly to the mounting bracket. Disconnect the two wires from the horn. Put this assembly aside for now.

STEP 4. Remove the two large bolts that attach the Harley Horn Bracket to the engine. You will not re-use this Harley horn bracket.

STEP 5. Attach bracket “A” as shown in the drawings. Place the bracket on the bottom of the frame with the rounded and protruding section facing the rear of the bike. (See drawing) Tip. (Securing the T bracket to the bottom of the frame is really simplified if you temporarily tape the bracket to the frame, to hold it in position while you are installing the worm clamps.) Center the bracket between the two heads. The placement is not too critical because there is a lot of adjustment in any direction that allows you to easily position your Love Jugs perfectly.

See drawing. (Use a ¼” drive ratchet, extension, and socket to tighten the clamp.) When the two clamps have been tightened, check to make sure that the assembled bracket is straight, secure, and tight to the frame. Now, that the clamps have been installed, you can snip or cut the excess material of the clamps if you wish. (Recommended) so no contact with the gas tank is possible.

IMPORTANT… Position the clamp’s hub so the entire hub is tucked under the bracket. Do not position the worm gear hub on the sides of the frame, because contact with the gas tank can cause the gas tank to rupture, and could result in a gasoline fire if the hub rubs against the gas tank.

STEP 6. Using the hardware provided, attach bracket “B” as shown in the drawings. When the brackets have been bolted together, it’s a good idea to check that the assembled bracket is firmly attached to your frame, Use two fingers to grab the bottom of the bracket and check if there is any movement when you jiggle it in all directions.) This Super Heavy Duty, Solid Stainless Steel bracket has to support a mere Five Pounds! Our Frame Mount Bracket has been Engineered to exceed that load requirement by a factor of 20-1

This Super Heavy Duty, Solid Stainless Steel bracket has to support a mere Five Pounds! Our Frame Mount Bracket has been Engineered to exceed that load requirement by a factor of 20-1. Engineered and designed for a life time of use.

STEP 7. Remove the two ¼” bolts that fasten the Harley horn cover to the chrome Harley horn bracket. You will not reuse these bolts. (Too short) Sandwich the love jugs main frame between the chrome horn bracket and the horn cover using the two new ¼” bolts, 5/8” long, and two ¼” flat washers, if you have room, install two 1/4” nuts provided to add additional strength to the clips. Make sure that the bottom bolt does not crush into the body of the horn. Harley has used different vendors for their horn over the years which are slightly different so, make sure to avoid a crushing situation of the bottom bolt. Note. You have a choice to have the Lit red switches on the top or on the bottom of the Love Jugs assembly, it does not effect the performance in any way.

STEP 8. Using the 5/16” X 18 stud provided, Install the original Harley chrome washer and acorn nut to one end of the stud. Next, insert the stud into the Harley chrome horn mount bracket assembly complete with the Love Jugs cooling system sandwiched in the middle of the chrome Harley horn bracket and the Harley horn cover. Screw the three I/4” thick rubber washers onto the stud. Bolt the assembled Love Jugs unit and horn assembly into the Love Jugs name plate rod. 100 – 120 inch pounds of torque is recommended on the chrome acorn nut.

CHECK ALL THE NEWLY INSTALLED PARTS TO MAKE SURE THAT THE GAS LINE AND WIRES ARE NOT TOUCHING ANY PART OF THE BRACKETS OR ENGINE.

Harley Touring bikes with an accessory switch on the dash.

Locate the Harley accessory plug included with your bike which is located under your seat. It will be tucked down a couple of inches at the front of the battery. Remove the rubber dust plug.

Route the Love jugs harness up under the gas tank and secure the harness to existing wires with the included wire ties. Run the rest of the harness under your seat and plug it into the Harley accessory plug.

Make sure the wire harness is not touching the engine or too close to the engine. 1” is the minimum recommended clearance. Use the included wire ties to secure the harness to areas that are appropriate to position the harness to avoid any unwanted contact from heat and vibration sources. Also, make sure the harness will not be crushed when you re-install the seat. Turn on the ignition, then your accessory switch located on your dash, to make sure the fans are operational before you install the gas tank and the seat.

Cut off the plug from the “Love Jugs” wiring harness. Connect the red wire to the positive (+) terminal of the battery with the included terminals.

WARNING-Do not connect the red/positive wire to the (+) battery terminal, without installing the 15 AMP in-line fuse provided. Connect the black wire to the negative (-) terminal of your battery. Turn on the switches on the “Love Jugs to activate the fans.

BEFORE STARTING ENGINE, CHECK ALL THE NEWLY INSTALLED PARTS TO MAKE SURE THAT EVERYTHING HAS BEEN PROPERLY TIGHTENED AND THAT THE GAS LINE AND WIRES ARE NOT TOUCHING OR TOO CLOSE TO ANY PART OF THE BRACKETS OR ENGINE.

There are literally thousands of Harley Models. Factors like the year of manufacture, frames, engines, rubber mounted engines, solid mounted engines, customs, etc. all play a role in producing varieties. Therefore, a comprehensive list of “Will fit” models for the Frame Mount Kit is not possible to publish. Here’s the sure-fire way to determine which mounting system works on your bike.

Our most important and desired installation option. The FMK removes the horn and Love Jugs assembly from your violently vibrating engine and mounts the entire assembly to your bike’s frame. Shaking and vibration of your Love Jugs will be reduced by 90+% insuring years of trouble free service. If your Harley Davidson will accept the Frame Mount Kit, by all means add this vital kit to your Love Jugs order by placing it now into your shopping cart. HIGHLY RECOMMENDED for the models it fits.

IMPORTANT: DO NOT ORDER THE FMK IF YOUR BIKE HAS THE STABILIZER ROD FROM THE HORN MOUNT BRACKET, TO THE FRAME (see picture).

IMPORTANT: IF YOU HAVE THE NEW ENGINE WITH THE WATER COOLED HEADS, THE FMK WILL NOT
FIT YOUR  MOTORCYCLE.

The Water Cooled Frame Mount Kit (WCFMK) is the correct choice to insure the best possible installation of your Love Jugs. Like all Love Jugs products, the Kit will match the high quality standards our customers expect of all Hammerhead products.

There are cooling hoses in the area that the FMK needs to be mounted. Also, these rubber mounted, water cooled models shake excessively at idle. If your Harley is equipped with water cooled heads. HIGHLY RECOMMENDED.